SFDUU Community Clean Up The Maiden Voyage of "Da Rig"

The San Francisco Drug Users Union recently received reports  from residents of an area south of Market Street aka SOMA that there was an increase in the number of improperly discarded intravenous syringes in the alleyways. The specific alleys were in an area between 6th and 7th streets and Folsom and Harrison. The SFDUU planned and executed a thorough sweep of the area this past Wednesday August 28th between 5-7 pm.
Three Staff members and three general members gathered at the SFDUU office at 149 Turk St. at 5:30 and set off pushing the SFDUU's new Mobile Needle Exchange Vehicle aka "Da Rig" which is outfitted with multiple sharps containers, lights and a coffee cup holder. All members wore t shirts identifying us as SFDUU members. With rubber gloves, tongs, and small sharps containers in hand we made our way down Sixth St. and proceeded to scan the dark crevices and curbs in all the alleys where there were reports of syringes.  Surprisingly few syringes were found in the areas where they were reported to be. We found the most syringes closer to Sixth St. but overall less than 100 syringes were found in a large area of SOMA. There was much more evidence of human feces then there was discarded syringes. Afterwards members and staff agreed it was a success and warmly received by the community.
At one point we stopped to ask people at a dog walking area if they had seen any needles and they all scratched their heads and had a hard time remembering the last time they had seen one. This is in a town where over two million needles are given away at exchanges so somebody is doing something right. Is it the drug users who are predominantly properly discarding of their used syringes? Based on the numbers it would seem that very few of of those two million needles are ending up on city streets. It's time for drug users to stand up and take some of the credit for accepting the education received from the needle exchange providers on safe disposal of used intravenous equipment.
At the exchange we run we know that drug users feel and act responsibly about syringe disposal in the vast majority. We know because while many are homeless they still carry portable sharps containers and bring them to us to exchange. The SFDUU was proud to come and do the Community Clean Up and will plan to respond to requests from the community as often as possible in the future.
Gary West should get credit for building "Da Rig" The members who volunteered were Zack  Doc, and Johnny II, Johnny Lorenz and  Dylan Gealach-Selkie of the SFDUU staff were there as well. 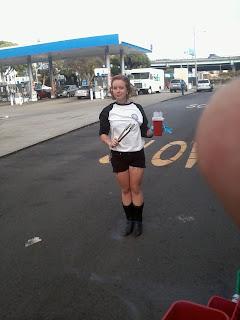 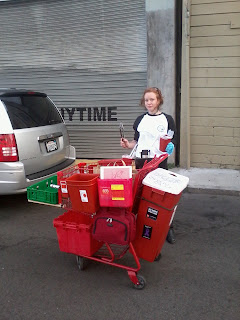 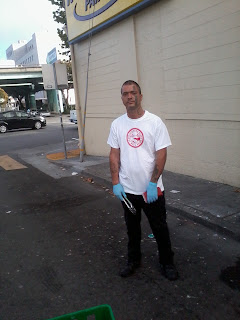 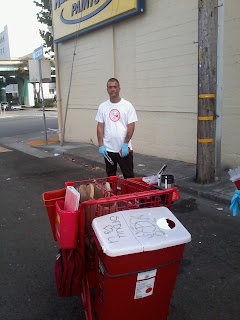 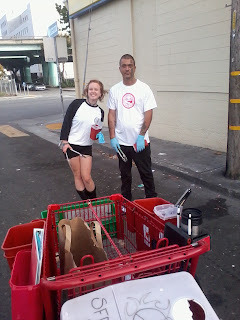 Posted by Johnny Lorenz at Thursday, August 29, 2013 No comments:

Over the history of this union we have asked members what are the the most important issues confronting them and the discrimination drug users are subjected to at medical facilities here in San Francisco is always at the top of the list. The stories members tell about medical access discrimination span most of their lifetimes, but there are new tales of abuse by medical personnel and the systems under which they operate coming into our office on a daily basis. There are several categories into which these discriminatory practices fall but they all start with a derogatory attitude toward drug users who present themselves seeking treatment and end with drug users being denied services. Here are a few of the categories as defined by our membership.
Denial of minor surgery as a consequence of testing positive for an illegal substance is a common practice at many facilities including San Francisco General Hospital which is the predominant service provider to the drug using community. Patients who test positive for an illegal substance are routinely told they must go to rehab and test clean for 6 months to a year before any surgery will be scheduled or performed. This leaves drug users walking around untreated with knees and hips that need replacement, cataracts, herniated discs, broken bones that need to be reset and many other painful ailments.
Denial of opiate pain medication or severely restrictive "pain management contracts" are routinely imposed on drug users who self report a history of problematic opiate use or any history of drug use at all. Drug users who are homeless and lose or have their medications stolen are unfairly targeted by these policies. Apparently many doctors would rather have their patients in pain than risk their licence and many still have issues prescribing opiate pain medications to people on opiate substitution therapy.
Denial of liver and or other organ transplants or being taken off transplant list as a consequence of having a drug use history or using legally prescribed medical marijuana. Several news stories have appeared in the last year that document only a handful of the known cases of medical boards denying life saving transplants. There are many more cases of drug users dying after being denied transplants that have yet to be exposed by the media.
Denial of opiate replacement therapy or any treatment for opiate withdrawal especially for drug users who are incarcerated. Even in a hospital setting drug users in opiate withdrawal are often either denied basic detox medications or are not given adequate, if any, treatment. If  a drug user shows up at an emergency room in withdrawal they will most likely be denied any services at all until their symptoms are extreme. Incarcerated drug users in the SF County Jail are not given anything to kick with currently unless they are already on methadone maintenance. For those on maintenance they are forced to reduce their dose to an arbitrary level set by the jail. There are also reports of inmates prescribed pain medications being reduced to "non euphoric" levels which usually means their pain is no longer being treated.
We the  members of the San Francisco Drug Users Union think that these practices and others in the medical facilities that serve our community are human rights abuses and should be publicized, criticized and eventually stopped for the sake of the health and dignity of people who use drugs in San Francisco. This is not to say that we do not recognize the contribution and sacrifice of doctors and other medical personnel in San Francisco who truly ascribe to a harm reduction policy in the treatment of people who use drugs. The problem is that they are few and far between and the reports from our members old and new reflect that this source of stigmatization is the current reality in San Francisco.
Our plan is to coordinate with our community partners to raise public awareness on these issues and to encourage changes all the way from the local department of health to the statehouse in Sacramento and beyond. If you have stories to tell or want to work with us on this come on down to 149 Turk St SFCA to The San Francisco Drug Users Union this is what we are all about.

Why Do We Give Out Brillo

During our Sunday needle exchange we hang a sign out front that reads "Free Brillo". It attracts attention sometimes negative. Several people walked by and made comments such as "that's messed up". A neighbor even came into complain but as usual ended up hanging out getting to know us heard what we had to say and changed his tune. We give out brillo because when crack is smoked through a glass pipe the impurities and filler used to make crack burns up and collects in the copper brillo used to hold the crack as it is being vaporized.  After a short number of uses the pipe becomes clogged unless the brillo is cleaned or replaced. When the pipe is clogged people tend to inhale harder and harder to get a hit. They also tend to overheat the pipe at this point and this is when a red hot ball of copper can loosen in the pipe and severely burn a persons mouth or the back of their throat. Fresh brillo is not always easy to come up with in the city or finding the money to buy it can be tough too. The bottom line is that no one deserves to suffer a terrible injury because they have chosen to use crack cocaine. That's why the San Francisco Drug Users Union gives out free brillo to drug users in the Tenderloin.
Posted by Johnny Lorenz at Tuesday, May 14, 2013 No comments:

The SFDUU Writers workshop is a powerfully moving experience for all the members. Facilitated in a highly professional manner by our own writer in residence Jesse. He creates a space where drug users can safely express themselves. We will be publishing selected works on this blog shortly. The work shops are on Tuesday at 530pm at 149 Turk be there or you will literally be square.

Posted by Anonymous at Wednesday, April 03, 2013 No comments:

Wed Apr 3
1pm 2:30pm
Brown & Allies Just Cannabis Policies. BBA-JCP is a cannabis policy network and group that advocated primarily for persons of color but advocate for all cannabis users as a whole.

Posted by Anonymous at Saturday, March 30, 2013 No comments: 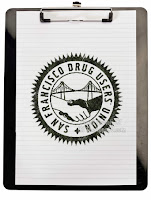 We OPEN in the afternoons, three days a week. Closed to the public Thursday-Sunday.  But the work on ending drug war and fighting drug user stigmatization starts with you!  Please visit our office and join us.

for more info:
info@sfdrugusersunion.org
Posted by Badlydrawnbear at Saturday, March 02, 2013 No comments: